When Do We Find Ourselves 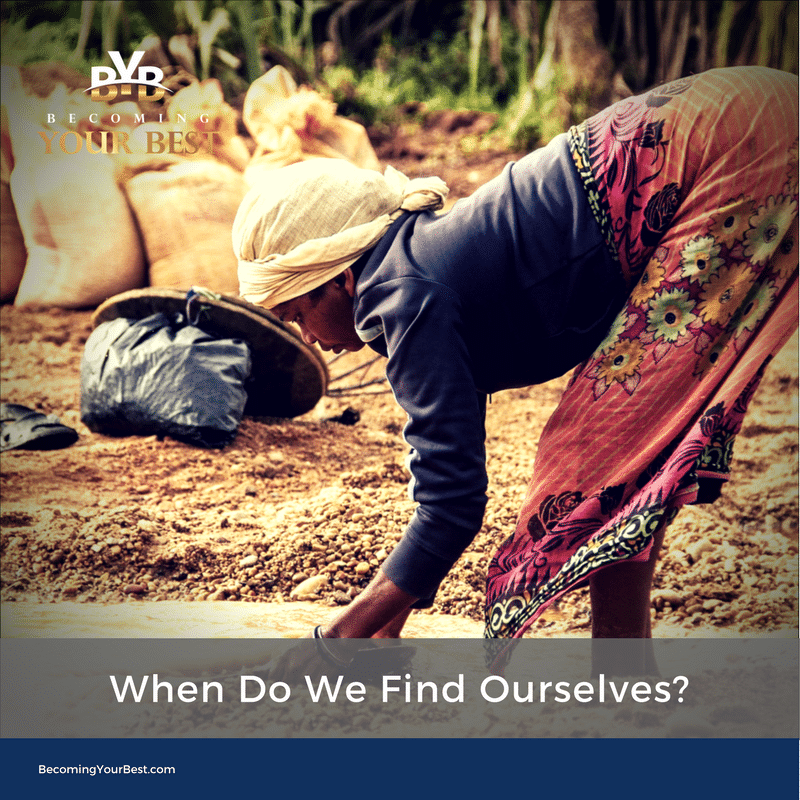 Have your ever felt overwhelmed, or task-saturated, or just inundated with work, and you just feel like things are pressing in on you from every angle? Well, you’re not alone in that. Just recently, over the last 30 days, I’ve had lunch with two separate CEOs who, from the outside, their world would appear to be spectacular, yet both of them confided to me that they really haven’t felt this alone in their life, like they’ve lost themselves. And it’s ironic because, from the outside, everything looks great, yet on the inside, there’s turmoil and there’s crisis inside their lives.

And so, I was driving down the canyon the other day, and I had this thought, that, when do we really find ourselves? It’s when we lose ourselves in the service of others. So, we find ourselves by finding ourselves in the service of others. And this story came to mind as we’re righting our book right now, “Becoming Your Best for Teens”, and we’re in the lead with a vision chapter and looking at how teens have done that in their lives, and this story came to our desk of Ryan. And we’re actually gonna have him on one of our podcasts, and here’s a brief nutshell version of this. And as I share with you Ryan’s story, think about how this applies to you in your life. What are you doing right now in the service of others? What impact can you have? What problem can you solve? And simply by asking those questions, it ‘s amazing what the mind can formulate and generate.

So, here’s Ryan between the ages of six and seven, and his schoolteacher in his elementary told the class, “Hey, for just $70 you can build a well in Africa and bring clean water to these people who otherwise don’t have it.” She showed them some clips of the people drinking this muddy, murky water out of a river, and he thought, is, “All I have to do is walk down the hallway and drink some water out of the drinking fountain.” And this really inspired Ryan, and so there he is at age seven, and he said to himself, “I wanna build a well in Africa.” And so, he was determined to raise the $70.

Well, he went home and his parents gave him some jobs, and it took him four months to raise $70 dollars. Well, to his surprise, it wasn’t $70 to build a well. It was actually $2,000. Well, now, he could have given up, but yet he had a vision, a purpose, a cause that inspired him, so he redoubled his efforts. He started asking, how can he raise the $2,000, and he started speaking at some of the local Rotary clubs and other organizations in his community. And over the course of the next few months, he raised the $2,000 and built his first well in Africa.

And Ryan didn’t stop there. Within a year, astonishingly, he had raised another $200,000, and then by the time he was 12 years old, he’d continued this journey in pursuit of his vision, he had raised another $750,000 towards wells in Africa. And now, fast forward several years later, after being on Oprah and a couple of other shows, he is now finishing up college. It’s the Ryan’s Well Foundation, and I just checked their website. He has brought clean water to almost 900,000 people in Africa. And you think about how he found himself, his passion. It was in the service of others. That’s where it started. And not to say that he would neglect himself in the process, because that’s important, as well. It all started, however, for him at age seven when he had a vision of what he could do to solve a problem in the world.

Now, if you haven’t already gone to the “5 Minute Leadership Makeover“, go there now. It’s 5minuteleadershipmakeover.com. Share this. Send this to a family friend, or family, or a friend, or someone who you know that could benefit from it. They get three free videos that can help kick-start where they’re at, and that’s wherever they’re at in life.

So, hope you have a fabulous day, and that this short story’s been helpful to you.