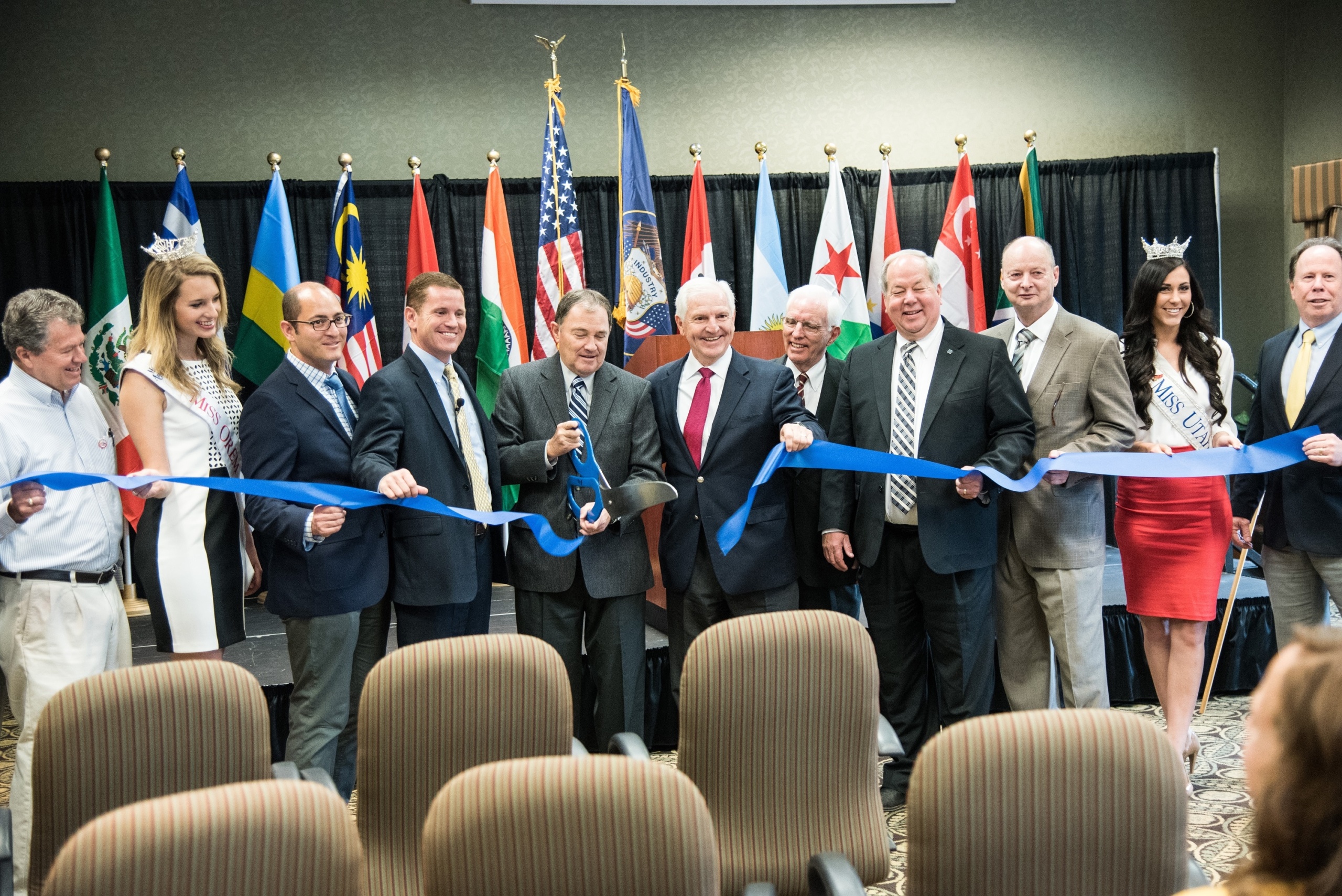 By: Tammy Scoville, Freelance Writer on Leadership and Excellence

As morning mist hugged the Midway Mountains and Bavarian music piped cheerily down on the parking lots of The Zermatt Resort in Heber, Utah, the Governor described “a world where geographical, political, and linguistic boundaries are becoming increasingly irrelevant. The marketplace,” Herbert continued, “is becoming increasingly more global; and that is a good thing for the states, provinces, and countries which are prepared to compete in the global marketplace.” Both Governor Herbert and Steve Shallenberger seem ready to embrace the challenge.

Introducing the Governor, Steve Shallenberger, President of Becoming Your Best Corporation summed up the event in terms of celebration, enthusing, “We are here to celebrate the impact that leadership has on our lives and in our communities. Successful leadership is not something that happens by accident.” Shallenberger then recounted how he and the Governor were both at this same resort eight years ago, on separate assignments to speak to a successful business group. Brandishing his own hand-written notes from that event, Shallenberger recounted the principles of leadership taught by Governor Herbert eight years previous including: vision, great communication skills, dogged determination, and creativity. As Shallenberger retold some of the real life applications the Governor had shared in illustrating these principals in his speech a big grin swept across the Governor’s face, who quipped, “Those were good stories.”

Smiling and nodding, Shallenberger then asked the crowd, “May I add one more story?” He then described a mother gripping the hand of her young son as they waited in a long line to talk to Mahatma Gandhi. It was just after India had won its independence and the man who had led the peaceful charge was in high demand. “When she finally got to the front of the line,” Shallenberger said, “the mother asked Gandhi, ‘please tell my son not to eat sugar!’” Shallenberger continued, “But Gandhi just looked at the mother and said, ‘bring him back in a month.’ Then he moved on to the next person.” Shallenberger described the woman’s outrage, noting that she had no choice but to accept the strange response. Then “one month later,” Shallenberger continued, “the mother brought the child back again. Gandhi took the boy in his arms and looked him in the eye and said, ‘don’t eat sugar. It’s not good for you.’ Then he hugged him and handed him back to his mother. Stunned, the woman asked, ‘why couldn’t you have just said that last month?’ Gandhi replied, ‘because one month ago I ate sugar.’” This, Shallenberger concluded, is illustrative of the kind of moral authority necessary for good leadership, and indicative, he added, of the kind of leadership we are lucky to have in Utah.

Noting how Utah was recently rated by Forbes Magazine as “the best place to do business,” and is acclaimed for its fast growing economy, Shallenberger used Governor Herbert’s leadership as a positive example that stood in sharp contrast to the tragic consequences of poor leadership in places like Venezuela. Shallenberger shared how Venezuelan businessmen attending his leadership retreat in Australia last month had told him about conditions in their homeland including 3.5 hour wait times to get into a store with bare shelves, and the impact of living in a country where student protesters are silenced by deadly force or paralyzed by loss of hope for change. Contrasting these two examples Shallenberger challenged the crowd, “Tell me leadership doesn’t have an enormous impact on the lives of every day people?”

Governor Herbert echoed this theme, telling the group gathered at the leadership retreat that “we need leaders…sometimes we tend to be apathetic…as opposed to what we should be as good citizens, involved and willing to do our part and to do our best to help others become their best.” The Governor commended those in attendance for “develop[ing] your skills and your talents to be the best you can be so you too can be leaders.” And he reminded the group “one person can make a difference.” Governor Herbert, who is the new chairman of the Governor’s Association, also had strong praise for Shallenberger and The Becoming Your Best model continuing, “And I appreciate the fact that you’re now taking this [training] worldwide and around the country. Around the world there is a need for good leadership grounded in good principles with good values accompanying that leadership.”

The Governor then shared the story of Ryan Hreljac, who as a 2nd grader heard about the lack of potable water in Africa at school and decided to do something about it. Herbert recounted how Hreljac worked extra chores and inspired community support in order to reach his goal, raising $2000 to develop a well in Uganda that served 200-300 villagers. Hreljac, now a recent college graduate, has gone on to create a non-profit group that has developments in more than 16 countries and has drilled over 800 wells serving over 850,000 people. “One individual, even a young boy, can make a significant difference in the lives of many people…literally around the world,” Herbert concluded.

To finish the press conference, Governor Herbert officiated in a ribbon cutting to launch the Becoming Your Best Worldwide Leadership Tour, which will take Shallenberger and his group across the country and six continents to conduct leadership trainings for businesses and communities. The Governor then concluded the event by quoting Margaret Mead: “‘never doubt that a small group of thoughtful, committed people can change the world; indeed it is the only thing that ever has.’” Pausing briefly before looking up at the leadership retreat attendees and other community and government dignitaries at the press conference, Herbert continued, “This is a small, thoughtful, committed group right here. Who knows what can come out of this group as far as changing the world and making a positive impact?”

That is exactly what Shallenberger and the Becoming Your Best Team are counting on. Fully committed and confident in the 12 principles highlighted in Shallenberger’s best selling book, the Becoming Your Best Team says they are excited about the impact they believe is possible when leaders around the world implement these practical, tested strategies. “Take our recent trip to Rwanda,” Steve Shallenberger told me after the ribbon cutting, “while we were there we met with President Kagame who is leading his country back from the abyss of civil unrest and slaughter with his vision of what his country can become when they are united, inspired and focused. And we have been invited back to meet with them again this year to follow-up. But whether it is a world leader trying to unite a war ravaged country, a CEO trying to take his company to the next level, or a parent trying to cultivate a strong, connected family, what we see in our trainings over and over again, and what we see in our own lives, is that leadership matters and that people can learn skills and develop practices that can truly empower their lives and transform the lives around them.”

We can all agree this kind of impact and transformation would truly be a reason to celebrate.

By Tammy Scoville
Freelance Writer on Leadership and Excellence 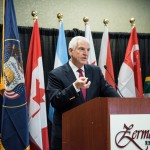 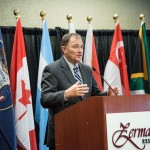 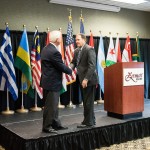 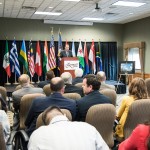 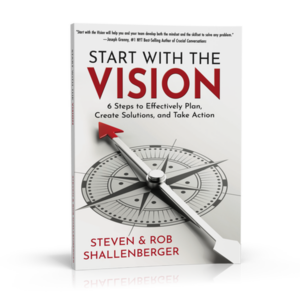