Episode 180 – How To Focus on What Matters Most 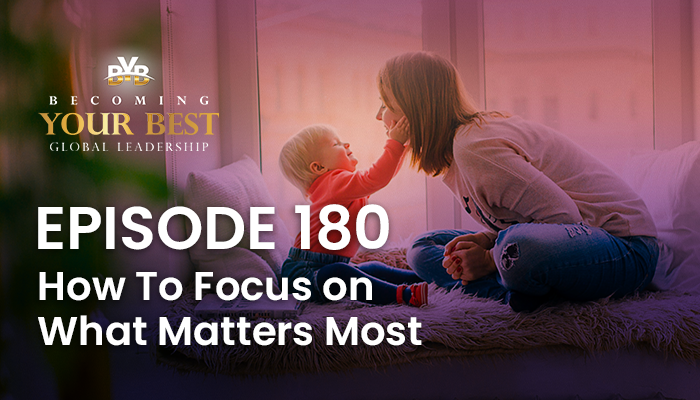 Rob Shallenberger: Alright, to our Becoming Your Best Podcast listeners, friends, family, wherever you’re at in the world, this is your host, Rob Shallenberger. I want to give you a great welcome, wherever you are. Today is a little different because our entire team is scattered all over the world. I’m doing this from my phone, instead of our normal recording equipment, so you may hear a little background noise. The purpose of this short podcast is to share with you a couple of things that I’ve observed over the last few days, that I would consider to be life-changing. They really caused me to ponder and think. I went on a drive this morning, down to get just a cable, so I had 30 minutes driving down the Canyon, back and forth, just a great time to ponder and be thinking about what I’m going to share with you in this podcast. I just got back from DC, where I did three separate keynotes, and in one of them, I asked everyone who was there, all 400 people, to look at the person on their left and on their right. And then I asked them, “Don’t you think it would be safe to assume that that person is going through a challenge that we know nothing about?” And everyone’s heads, they’re nodding, everyone can relate to this because we all have something. Call it your challenge, your Goliath, whatever you want to call it, we all have something, whether it’s finances, a relationship with a spouse, a son or daughter, a friend or someone who’s wronged us in a certain way. Maybe it’s being overweight and needing to lose weight or having high blood pressure. There’s all of these things out there in the world, we all have something.

Rob Shallenberger: Today is the day to take those challenges, those areas of improvement and make them our strengths, to address them head-on because tomorrow isn’t guaranteed for any one of us. I imagine that you can relate to this – sometimes, life is at a high, it feels like nothing can go wrong, everything’s working in our favor and when life is like that, it’s wonderful. And then, there are a handful of times where it’s tough, sometimes it’s tough to even see the light. You feel like, “Man, do I even have what it takes, to go on, to do this?” Pursue your vision, whatever that looks like. I think we can relate to that, whether it’s a relationship, a health goal, or whatever it is, it’s never too late to start, it’s never too late to make a course correction. For example, let’s take a relationship with a son or daughter if that applies to you. I’m sure there’s been a time in your life, like there has in mine, where we said something that we regretted, we wish we wouldn’t have said it. Well, instead of just holding on to that, now is the time to take ownership to apologize, to own up to what we did that it wasn’t right, and make the course correction and not waste another day dealing with that. Let’s move on! Let’s address whatever it is that’s the big issue.

Rob Shallenberger: As I mentioned right along this thing that we’re talking about here, as I’ve had the chance to meet with thousands of people all over the world, the one common denominator is that everyone has something going on in their life, that needs to be dealt with. Hence the words BECOMING YOUR BEST. And I’ve really been thinking lately about the word “becoming” because life can be a list of things that we check off, you know, yes I’ve got an MBA, a college degree – check, check; I did this, and I did that – check, check, check. What are we becoming in the process? We could check all the boxes in the world, but if we’re not becoming in the process, then to what end are we doing those things? And that’s what this is all about, it’s truly focusing on that word, “becoming” your best. Becoming itself is a verb, it’s a journey and what’s interesting about this word, in particular, is that if we focus on that word, “becoming” we should actually never arrive in this life. And that’s the whole spirit of the quote “Good, better, best – never let it rest, ’till the good is better and the better is best.” and in this journey of Becoming, I’m sure there’s a time where maybe we haven’t lost hope, but the hope has been diminished a little bit. Maybe we’ve given up on ourselves or we quit trying in certain aspects of the arena. I want you just to think about your life for a couple of seconds here. Is there something out there, that you still want to accomplish? Maybe it’s, again, a weight goal, maybe it’s a certain financial target, maybe it’s a relationship that needs mending. Whatever it is, NOW is the time to do what matters most in this journey of becoming.

Rob Shallenberger: I’m going to wrap up this very short podcast with two invitations for you. Number one, in this journey of becoming, it doesn’t matter what we’re checking off the list, if we’re not going in charity, in love and compassion, in a legacy of greatness that we’re leaving, and how we treat others, our relationships. So, invitation number one is to purposely do three acts of kindness for someone else today, a stranger, a family member. In other words, purposely focusing on doing three acts of kindness. They don’t have to be huge, monumental things, maybe it could be as simple as a compliment. I’m inviting us to flip the lens so that we’re not looking inward, rather outward. When you do this, and I just tried this yesterday, and I say “tried” because there were several times where I had the opportunity and I missed it and eventually I got it, but I thought, I had several opportunities that I missed on, and so I’m recommitting today, as we fly to Spain, later this afternoon – I’m going to look for these opportunities to compliment someone, to open a door, to bend over and pick something up that someone dropped. These little things, I promise you, and I know you’ve experienced this, watch how you feel inside when you’re serving someone else. This is what I was going to say, I promise it’s hard to be angry, it’s hard to be down or upset when you’re doing something kind for someone else. So that’s number one, is to do three acts of kindness for someone today. See how you feel.

Rob Shallenberger: Number two, since this idea of becoming should be happening today, not procrastinating another day, another week, I’m going to invite you to go to Youtube, and search for a talk that was given, called, “The Last Lecture” by Randy Pausch. I know some of you have seen this before. If you have, I invite you to watch it again. If you’ve never seen it, you are in for a treat, it is one of the best talks I’ve ever heard in my life! He delivered this lecture to his students, in September 2007 at Carnegie Mellon. He was a professor there, and they have what they call, “The last lecture” which is typically symbolic of their Final Talk at University. In this case, it was his last lecture. The month prior to giving this talk, he was given the diagnosis that his pancreatic cancer, which he found out a year prior, was terminal. So, this was indeed his last lecture at Carnegie Mellon. He passed away 10 months later after giving this talk. It was later published in a book, it was on the New York Times Bestseller for something like 110 weeks, something just amazing like that, because it was so powerful, and it’s a great talk about focusing on what matters most, with the time that we have. It is not an understatement to say, it’s a life-changing talk. It will really bring a perspective to you, to say, “You know what? Now’s the time!” If there’s something we need to fix, mend or do in our lives, now is the time. Let’s not waste another day on this!

Rob Shallenberger: So I wrap up this podcast with those two invitations. Remember this, becoming is a journey and if there’s something we wanted to do, let’s start now, because tomorrow is not guaranteed for any one of us, and we do not want to procrastinate or wait or delay another day. So, even though this is a bit short, I hope that has caused you to think and be powerful for you, in some form or fashion. So, whether you’ve seen it or not, three acts of kindness today, and then go to Youtube and look for Randy Pausch’s last lecture and listen to that, and see how you feel inside afterward, and I promise that it will move you and inspire you and light a fire within. So, this is Rob Shallenberger, wishing you a great day, wherever you’re at in the world. Let’s go out there and make a difference and do something kind just for one or two or three people today, and let’s start that ripple effect! Alright, have a great day!